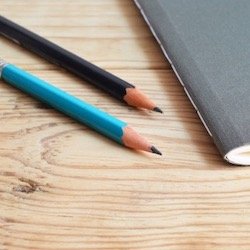 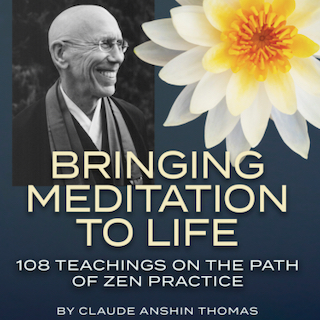 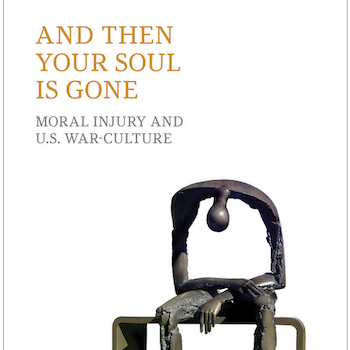 Kelly Denton-Borhaug, has long been investigating how religion and violence collide in American war-culture. She teaches in the global religions department at Moravian University. She is the author of two books, U.S. War-Culture, Sacrifice and Salvation and, more recently, And Then Your Soul is Gone: Moral Injury and U.S. War-Culture.

This summer, it seemed as if we Americans couldn’t wait to return to our traditional July 4th festivities. Haven’t we all been looking for something to celebrate? The church chimes in my community rang out battle hymns for about a week. The utility poles in my neighborhood were covered with “Hometown Hero” banners hanging proudly, sporting the smiling faces of uniformed local veterans from our wars. Fireworks went off for days, sparklers and cherry bombs and full-scale light shows filling the night sky.

But all the flag-waving, the homespun parades, the picnics and military bands, the flowery speeches and self-congratulatory messages can’t dispel a reality, a truth that’s right under our noses: all is not well with our military brothers and sisters. The starkest indicator of that is the rising number of them who are taking their own lives. A new report by Brown University’s Costs of War Project calculates that, in the post-9/11 era so far, four times as many veterans and active-duty military have committed suicide as died in war operations.

While July 4th remembrances across the country focused on the symbols and institutions of war and militarization, most of the celebrants seemed far less interested in hearing from current and former military personnel. After all, less than 1% of Americans have been burdened with waging Washington’s wars in these years, even as we taxpayers have funded an ever-more enormous military infrastructure.

As for me, though, I’ve been seeking out as many of those voices as I could for a long, long time. And here’s what I’ve learned: the truths so many of them tell sharply conflict with the remarkably light-hearted and unthinking celebrations of war we experienced this July and so many Julys before it. I keep wondering why so few of us are focusing on one urgent question: Why are so many of our military brothers and sisters taking their own lives?

The Moral Injuries of War

The term moral injury is now used in military and healthcare settings to identify a deep existential pain destroying the lives of too many active-duty personnel and vets. In these years of forever wars, when the moral consciences of such individuals collided with the brutally harsh realities of militarization and killing, the result has been a sharp, sometimes death-dealing dissonance. Think of moral injury as an invisible wound of war. It represents at least part of the explanation for that high suicide rate. And it’s implicated in more than just those damning suicides: an additional 500,000 troops in the post-9/11 era have been diagnosed with debilitating, not fully understood symptoms that make their lives remarkably unlivable.

I first heard the term moral injury about 10 years ago at a conference at Riverside Church in New York City, where Jonathan Shay, the renowned military psychologist, spoke about it. For decades he had provided psychological care for veterans of the Vietnam War who were struggling with unremitting resentment, guilt, and shame in their post-deployment lives. They just couldn’t get on with those very lives after their military experiences. They had, it seemed, lost trust in themselves and anyone else.

Still, Shay found that none of the typical mental-health diagnoses seemed to fit their symptoms. This wasn’t post-traumatic stress disorder — a hyper-vigilance, anxiety, and set of fears arising from traumatic experience. No, what came to be known as moral injury seemed to result from a sense that the very center of one’s being had been assaulted. If war’s intent is to inflict physical injury and destruction, and if the trauma of war afflicts people’s emotional and psychic well-being, moral injury describes an invisible wound that burns away at a person’s very soul. The Iraq War veteran and writer Kevin Powers describes it as “acid seeping down into your soul, and then your soul is gone.”

A central feature of moral injury is a sense of having betrayed one’s own deepest moral commitments, as well as of being betrayed morally by others. People who are suffering from moral injury feel there’s nothing left in their world to trust, including themselves. For them, any notion of “a shared moral covenant” has been shattered. But how does anyone live in a world without moral guideposts, even flawed ones? The world of modern war, it seems, not only destroys the foundations of life for its targets and victims, but also for its perpetrators.

Difficult Truths from Those on the Front Lines of Our Wars

For civilians like me, there’s no way to understand moral injury without listening to those afflicted with it. I’ve been doing so to try to make sense of our culture of war for years now. As a religious studies scholar, I’ve been especially concerned about the ways in which so many of us give American-style war a sacred quality. Think, for instance, about the meme that circulates during national holidays like the recent July 4th, or Veterans Day, or Memorial Day: “Remember that only two forces ever agreed to die for you: Jesus Christ and the American soldier. One died for your freedom, the other for your soul; pass it on!”

How, I wonder, do such messages further shame and silence those already struggling with moral injury whose experiences have led them to see war as anything but sacred?

It’s been years since I first heard Andy, a veteran of the Iraq War, testify in the most personal way about moral injury at a Philadelphia church. He’s part of a family with a long military history. His father and grandfather both served in this country’s wars before, at 17, he enlisted in the Air Force in 1999. He came to work in military intelligence and would eventually be deployed to Iraq.

But all was most definitely not well with Andy when, after 11 years in the Air Force, he returned to civilian life. He found himself struggling in his relationships, unable to function, a mess, and eventually suicidal. He bounced from one mental healthcare provider to the next for eight years without experiencing the slightest sense of relief. On the verge of ending his life, he was referred to a new “Moral Injury Group” led by chaplain Chris Antal and psychologist Peter Yeomans at the Crescenz VA Hospital in Philadelphia. At that moment, Andy decided this would be his last effort before calling it quits and ending his life. Frankly, given what I now know, I’m amazed that he was willing to take that one last chance after so many years of suffering, struggle, and pain to so little purpose. 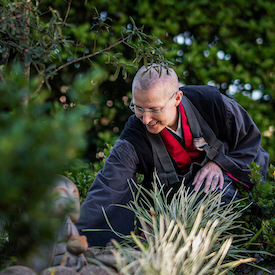 Even a Blade of Grass
By Wiebke KenShin Andersen

Many years ago, I read this quote from Thomas Jefferson: “There is not a single blade of grass that does not concern me.” It moved me that someone was willing to express their deep care for a blade of grass, something that many consider insignificant. Years ago,  I perceived this level of care and generosity as something unattainable.

My early impressions of generosity were formed on the farm where I grew up. Neighboring farmers sometimes helped us with the harvest in the summer, and, in return, in the evenings a long table was set in the kitchen and my mother prepared a delicious meal. Eating together at the end of a hard work day is one of the best memories of my childhood. I still remember that I found it very generous of my mother that she offered a meal in addition to the work agreement.

I also remember when my father, who was usually emotionally unapproachable, invited a foster child from our village to visit the farm to learn to milk a cow and drive a tractor. I was surprised that my father would do something for no direct gain, donating his time in this way. But that day I saw my father exuberant, serene, and even a little happy.

Through Buddhist practice I realized much later that no matter what happens, there is always something in return when one is generous, due to the law of karma, of cause and effect. The effect simply does not always take place in the moment and not in a linear way. When I act with generosity, often I do not know when or how the effect will take place. Freedom in giving is when I give simply to give. And yet it may be that I start at the point where I still have expectations of something in return. That's fine. Even such giving is good, not free, but good.

It’s said that those who cannot receive cannot truly give. I also want to look at this: How am I with receiving what is given? How am I at asking for help? I want to remember that giving and receiving can bring about joy, and yet joy is not always associated. I find a more neutral attitude to be more liberating: I give just to give. Sometimes it feels great, sometimes neutral, and sometimes it feels rather awkward. All these experiences have their place.

For example, in the spring of this year I fostered two tiny kittens for a local cat shelter. I had to bottle-feed them for about 5 weeks every 3 hours. Some nights brought me to the limit of my patience and resilience where I felt that I could strangle these sweet kittens. It was uncomfortable to admit these feelings and thoughts. But through practice I’ve learned that by deeply feeling and looking, change becomes possible. So, I made an effort to not deny these thoughts and feelings.

Caring for cats has become an essential part of my life and practice. It even shows my evolution in Buddhist practice, especially the point that interconnectedness can develop.  Working with cats has allowed me not to act so much from my head but that my decisions and my contact can come from a more intuitive place within me. That's why this work appeals to me.

So now a blade of grass does actually concern me.