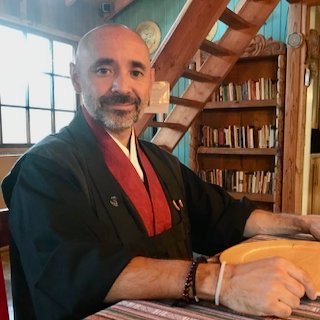 1. What year/how old were you when you joined the military?
I joined the Chilean military school (4 years of studying) in 1988 when I was 16 years old. In the two first year I studied in school plus some military trainings. The last two years the military studies as well as the training increased, for example military technology, horse riding, martial arts, ballistic and so on.

2. Why did you enlist in your branch of service?
I chose the infantry branch after 4 years in the military school because it was for me the most interesting area. After 5 years as an instructor of infantry, I studied (1 year and a half) in the Army Aviation Brigade, in order to become a pilot because I wanted to change myself and to do something different. To be in high altitudes was not easy for me, so I was looking for a challenge.

3. How many years did you serve and what unit/units?
Military School 4 years

4. Which practice forms (sitting, walking, working, eating, or Deep Listening and Mindful speech) have been important and supportive in your daily life?
The most important practice for me has been the sitting meditation even though I know all of them are different forms of practice sitting challenged me a lot, sometime because of some physical problems of my knees or back, however, at the same time this pain helped me to correct my posture. I feel that when my posture is correct, I can improve my life.

5. What drew you to Zen practice?
It was an internal voice that said many times: “Everything that you are doing is fantastic but you need to see inside of yourself.” - that is why I needed a teacher and follow teachings. For me this meant that I am coming back to my inner home.

6. How does Zen Practice influence your daily life?
From the beginning it was a wonderful experience. And little by little I was able to realize that Zen practice needs time and that my ordinary life was the practice. My military life became every day more difficult because that environment put (unintentionally) obstacles in my Zen path, for example the food was generally without any vegetarian options. That meant that during the last 8 years of my military career, especially in training times in the desert, often I just ate apples and bread. It was similar on the military base. The formal practice (sitting meditation) was complicated because often I spent time in the middle of the desert in large group of people, and I had to find a way to sit in silence. Also, it was not easy to get days off in order to attend a retreat. So, it was a hard period but now everything is different. Over all those years, without always consciously noticing, practice has been influencing all aspects of my life, such a new way of living, different eating, different friends (sangha), different holidays, and different residence, because I´m not in the army anymore and I can focus in my practice more than before.

7. What does it mean to you to be a part of this practice community?
It been a great help and support for me in times of hopelessness. I can write that it is my (spiritual) family. I received a Dharma name. I feel all of my fellow practitioners are my dharma brothers and sisters.

8. Who is/was the most inspirational person in your life and why?
It is difficult to mention only one because I have received much influence by many in different parts of my life. AnShin is one of them because I am able to identify with him in many aspects of life: first, he was a soldier, and he was part of the Aviation Unit; second, he used to practice martial arts and the most important thing is that he took a risk and changed everything in his life. It has been a long journey for him to learn to live with the suffering that is part of a war. Now he is a Zen monk and that is for me an example of courage. He helps me to understand that it is a privilege to live differently.

9. What did you want to be when you were a child?
I wanted to be architect or a psychiatrist but my dream was always to enter to a martial arts school in China and live there. So, I used to watch the kung-fu TV series and everything regarding the themes of master, teacher, and discipline.

10. What one word would you use to describe your Zen practice?
Discipline